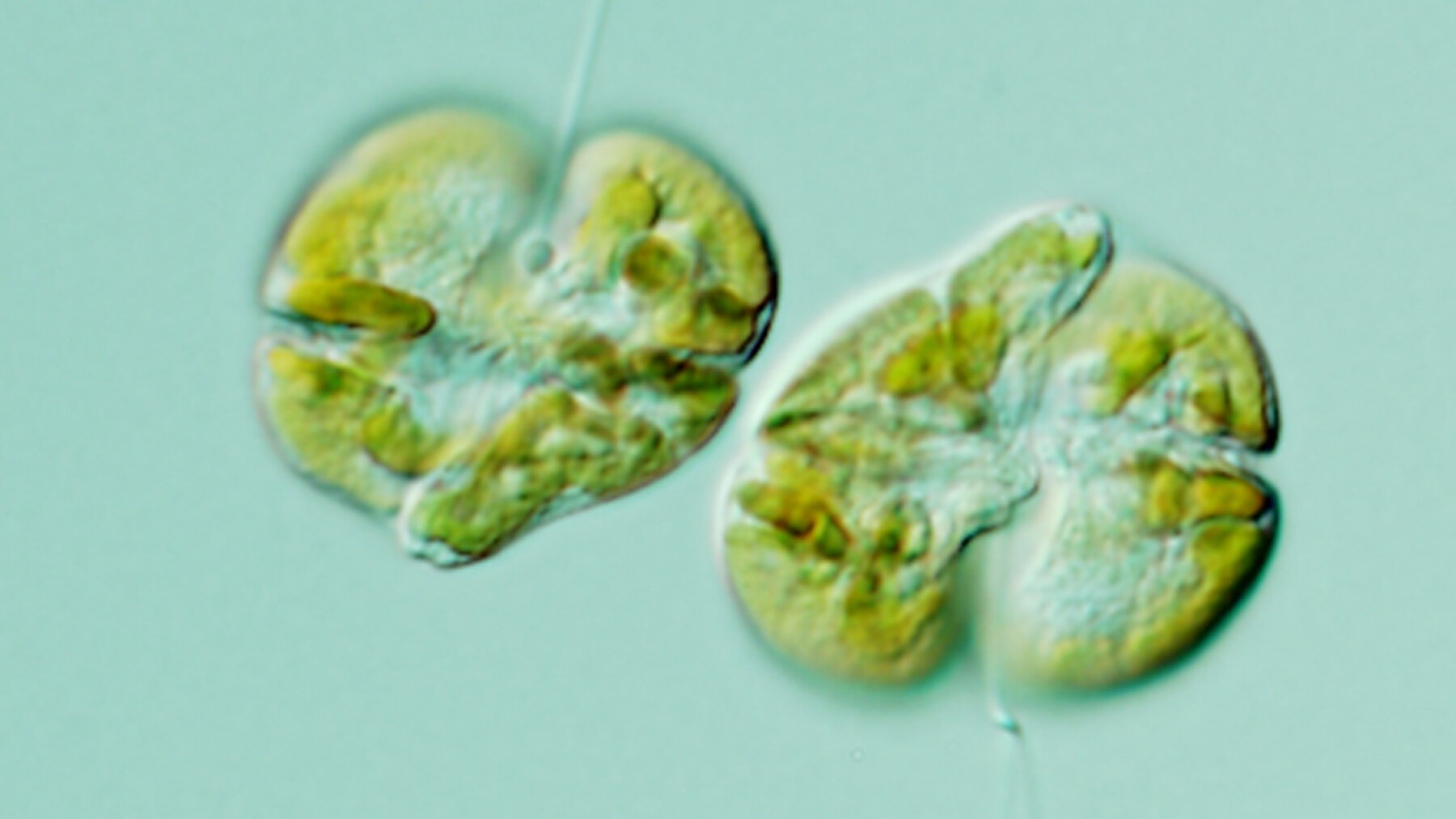 Red tide is one type of harmful algal bloom that is caused by high concentrations of toxic dinoflagellates, microscopic algae. In Florida and the Gulf of Mexico, the alga that causes most red tides is Karenia brevis, often abbreviated as K. brevis.

At high enough concentrations, red tide can discolor water and give it a red or brown hue. Blooms caused by other algal species can also appear red or brown, but may also take on a green or purple coloration. Some algal blooms appear colorless.

Red tides in Florida often develop in late summer and early fall with their point of origin typically 10-40 miles offshore. The initiation of any specific red tide event is difficult to predict, but once the algal bloom is located, the movement of the bloom may be forecast using wind information and water current data. Some blooms may be carried into shallow coastal waters, including bays and estuaries. However, K. brevis cannot tolerate prolonged exposure to low-salinity water and seldom penetrate the upper reaches of an estuary.

If a red tide is transported by wind and currents to nearshore waters, the algae can use nutrients delivered from adjacent watersheds to fuel their growth and sustain the production of toxins with a broad range of negative impacts. Karenia brevis produces potent neurotoxins (brevetoxins) that can affect the health of both wildlife and people. For people, brevetoxins can cause respiratory irritation or illness if inhaled or neurotoxic shellfish poisoning if contaminated seafood is eaten.

Red Tide blooms occurs when elevated concentrations of Karenia brevis are present in the water. View this infographic to learn more about red tide, including potential effects. 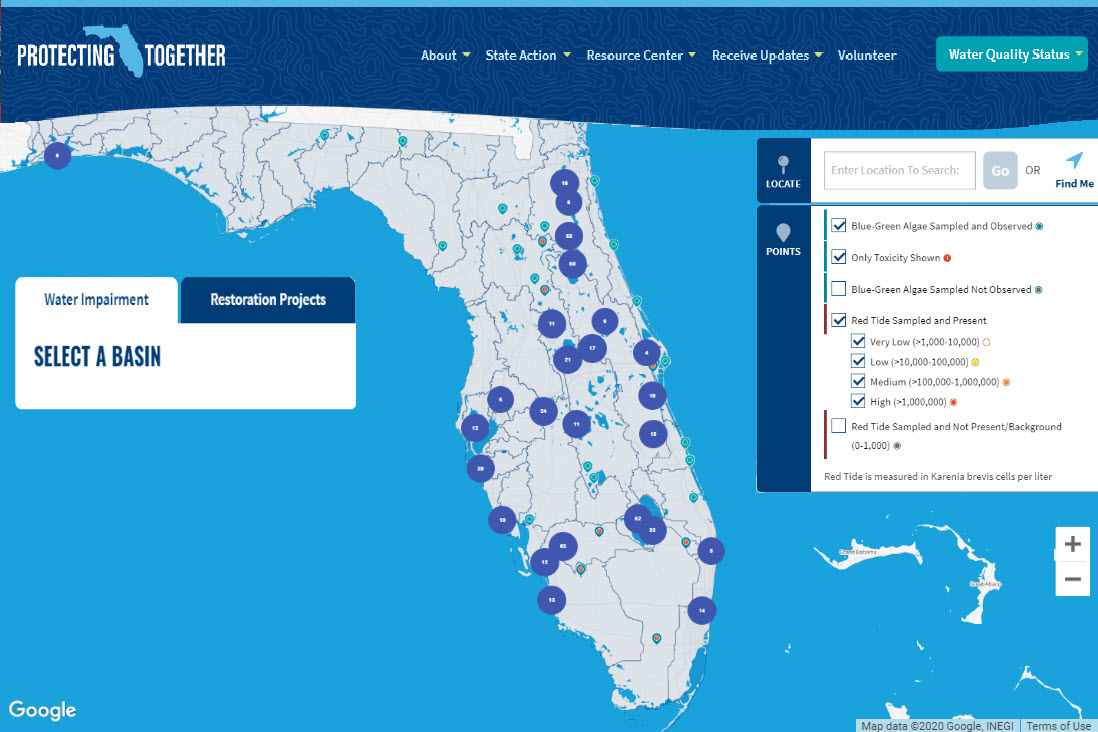 The Protecting Florida Together Water Quality Dashboard delivers relevant water quality information statewide including blue-green algae, red tide and nutrient monitoring data. This map helps to ensure transparency and accountability with respect to our water quality data and its exchange with the public. Information for this map provided by DEP and FWC. 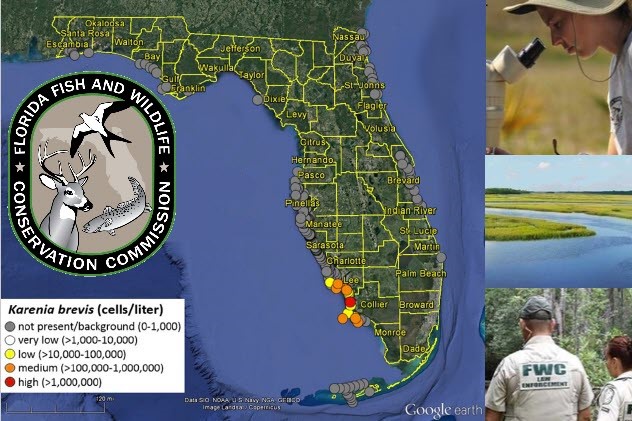 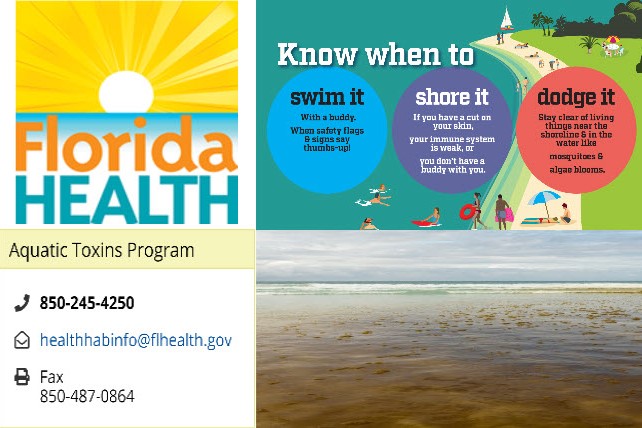 Staff at the Florida Department of Health’s Aquatic Toxins Program work every day to keep Floridians and visitors to our state safe. DOH works in coordination with many partners, including DEP and FWC, to ensure public health is protected. 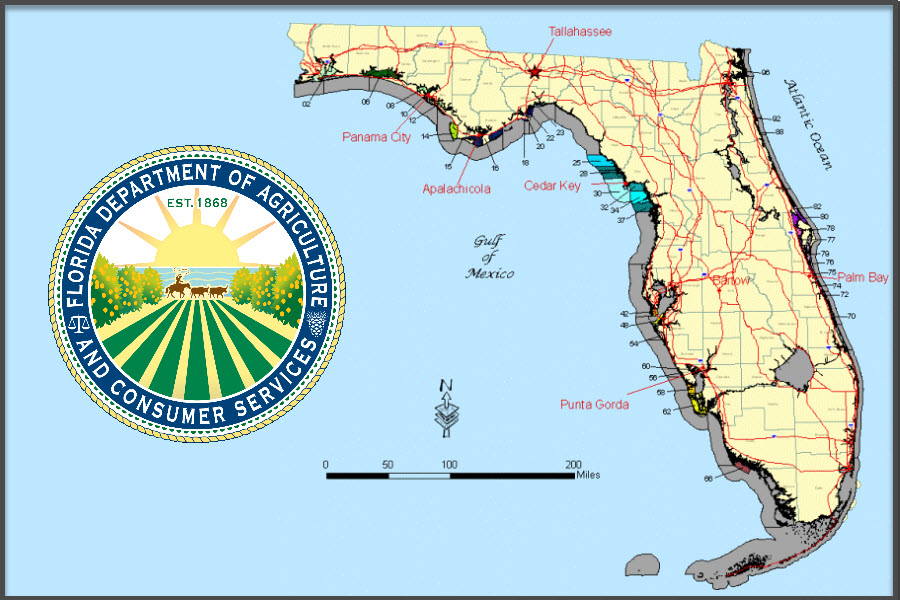 To prevent neurotoxic shellfish poisoning, harvesting of shellfish is prohibited in an area when cell concentrations of red tide organisms exceed 5,000 Karenia brevis cells per liter. The Florida Department of Agriculture and Consumer Services provides information on the current status of shellfish harvesting. 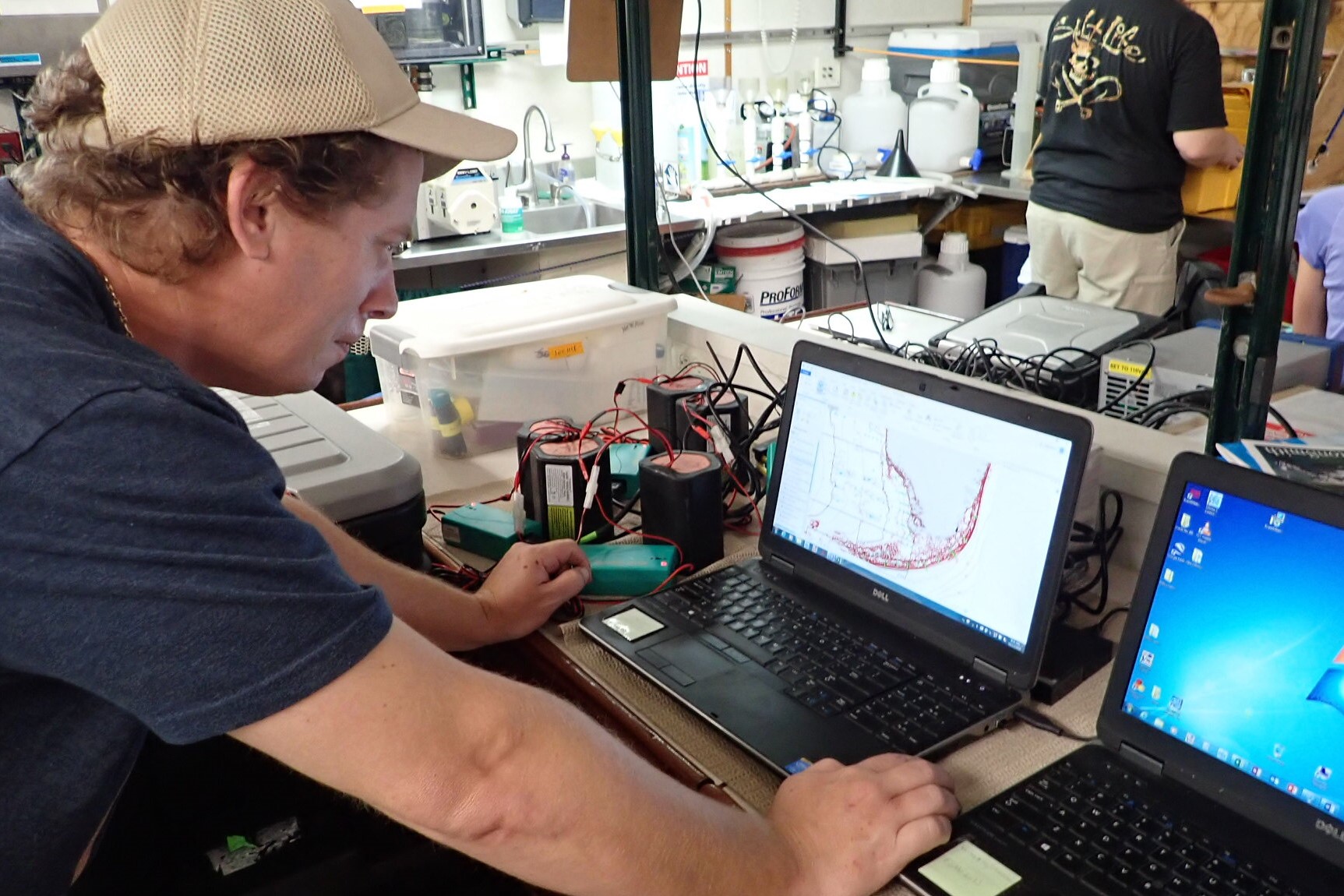 FWRI biologist reviewing potential deployment sites to set cameras and traps. NOAA invited FWRI biologists along with multiple partners on a South Florida Ecosystems research cruise aboard the R/V Walton Smith: Oct. 12-19, to sample the ongoing red tide on the southwest Florida Shelf. The focus will be on quantifying human health and ecosystem impacts from the red tide event. 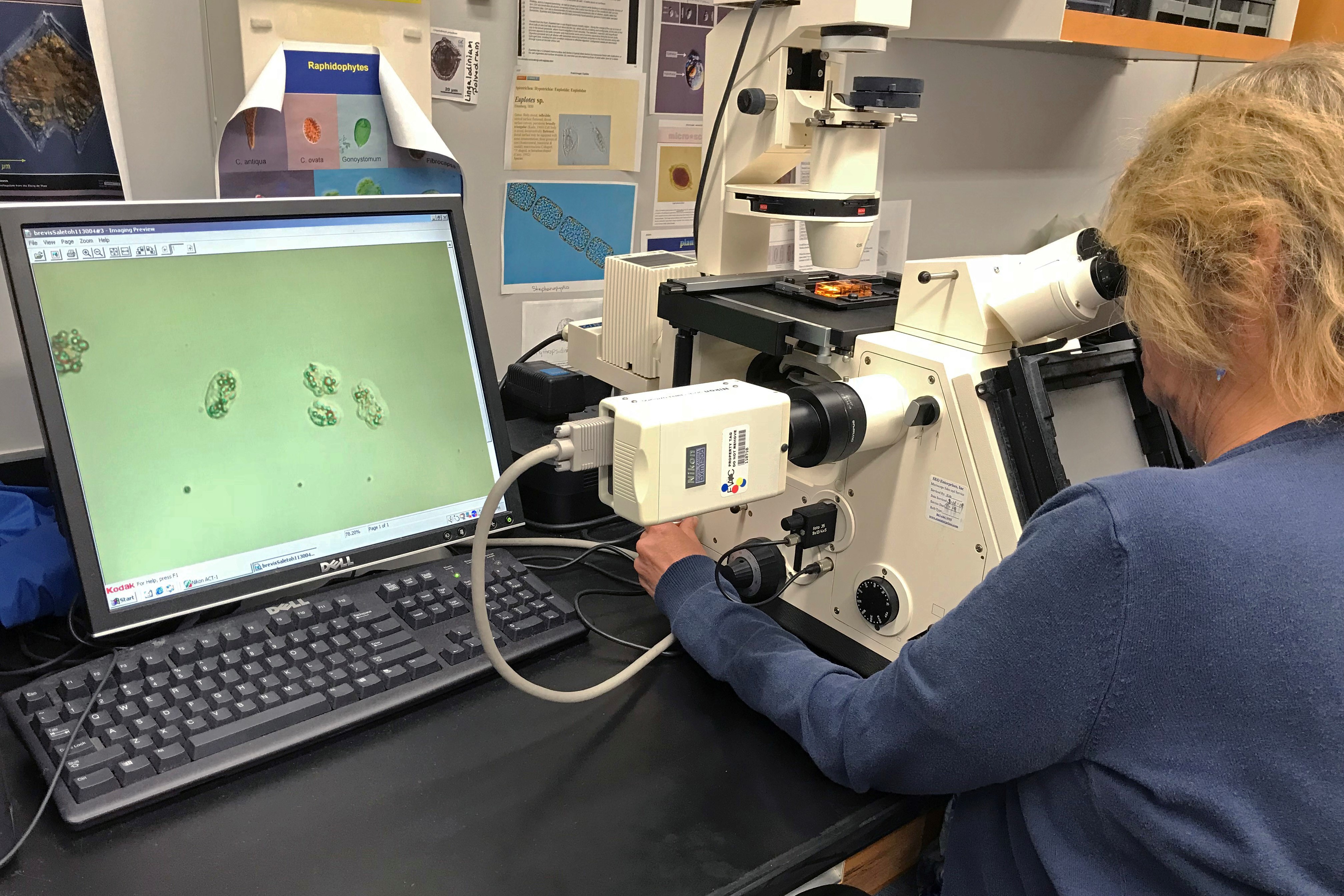 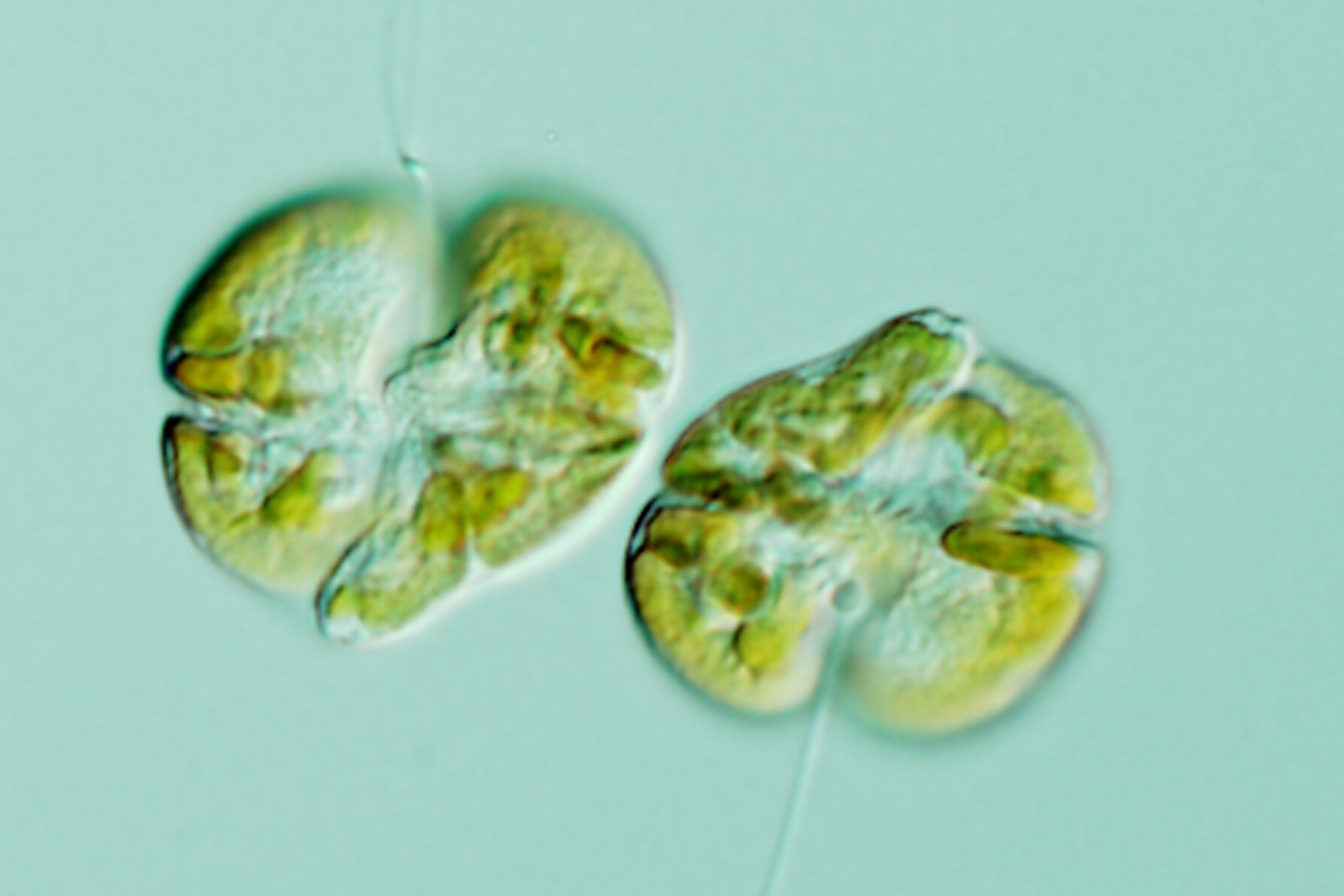 Light micrograph image of K. brevis, the alga that causes most red tides in Florida. 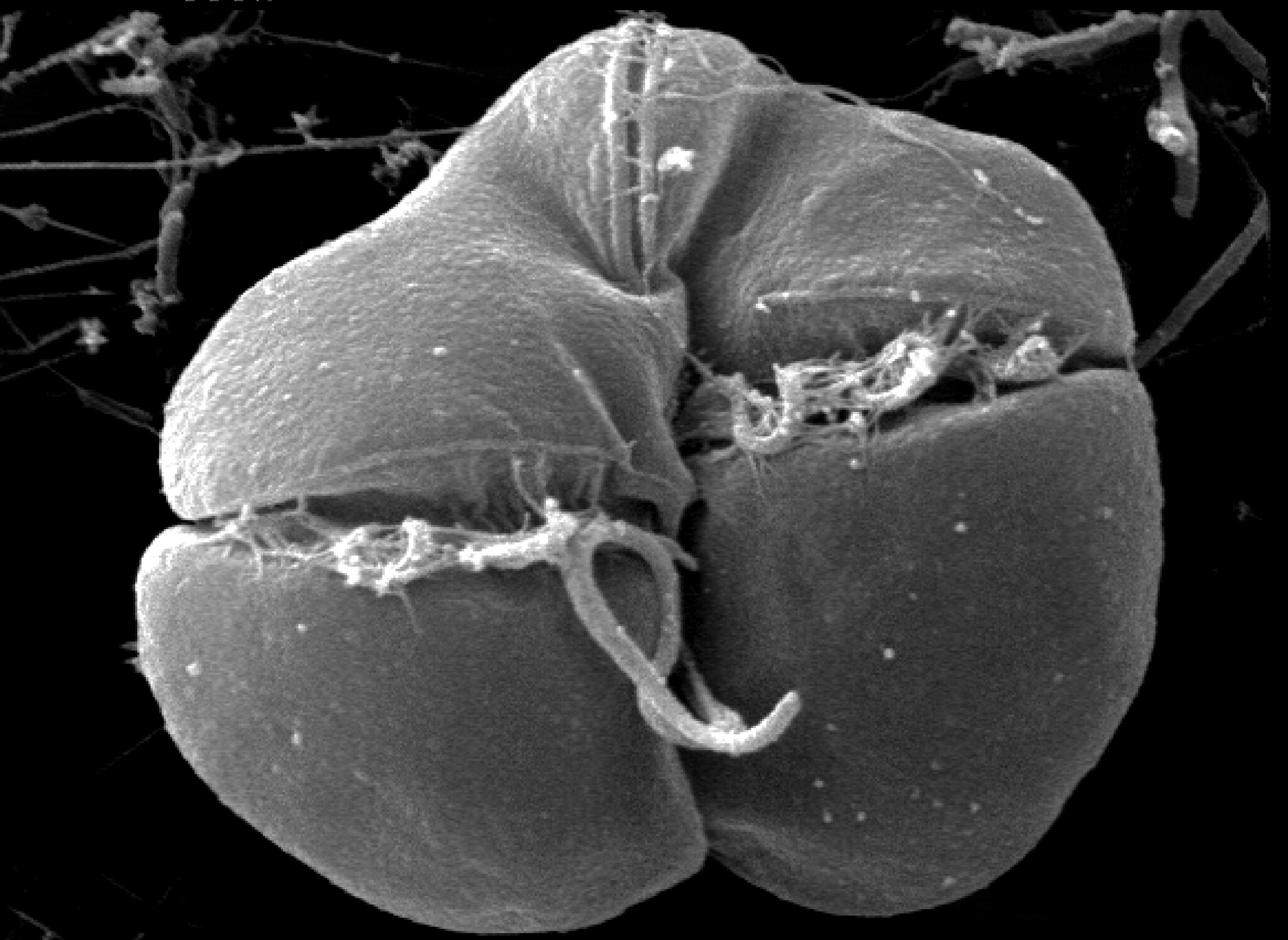 Scanning electron micrograph image of K. brevis, the alga that causes most red tides in Florida. 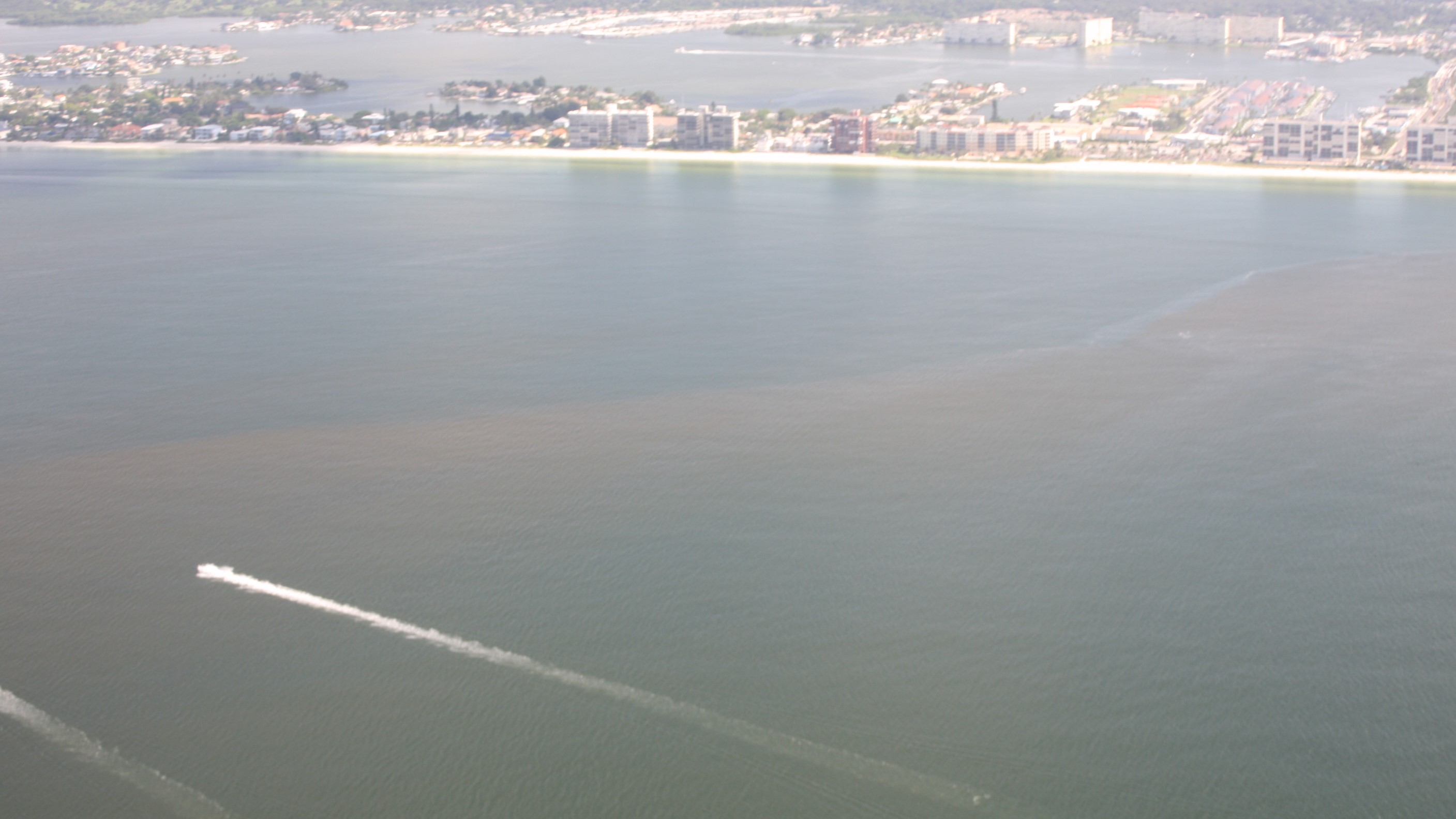 FWC conducted an aerial survey for red tide in 2018. A patchy bloom was observed along the 1-mile survey line. Water discoloration was visible from Pinellas County to Sarasota County, within 3 miles from the coast. 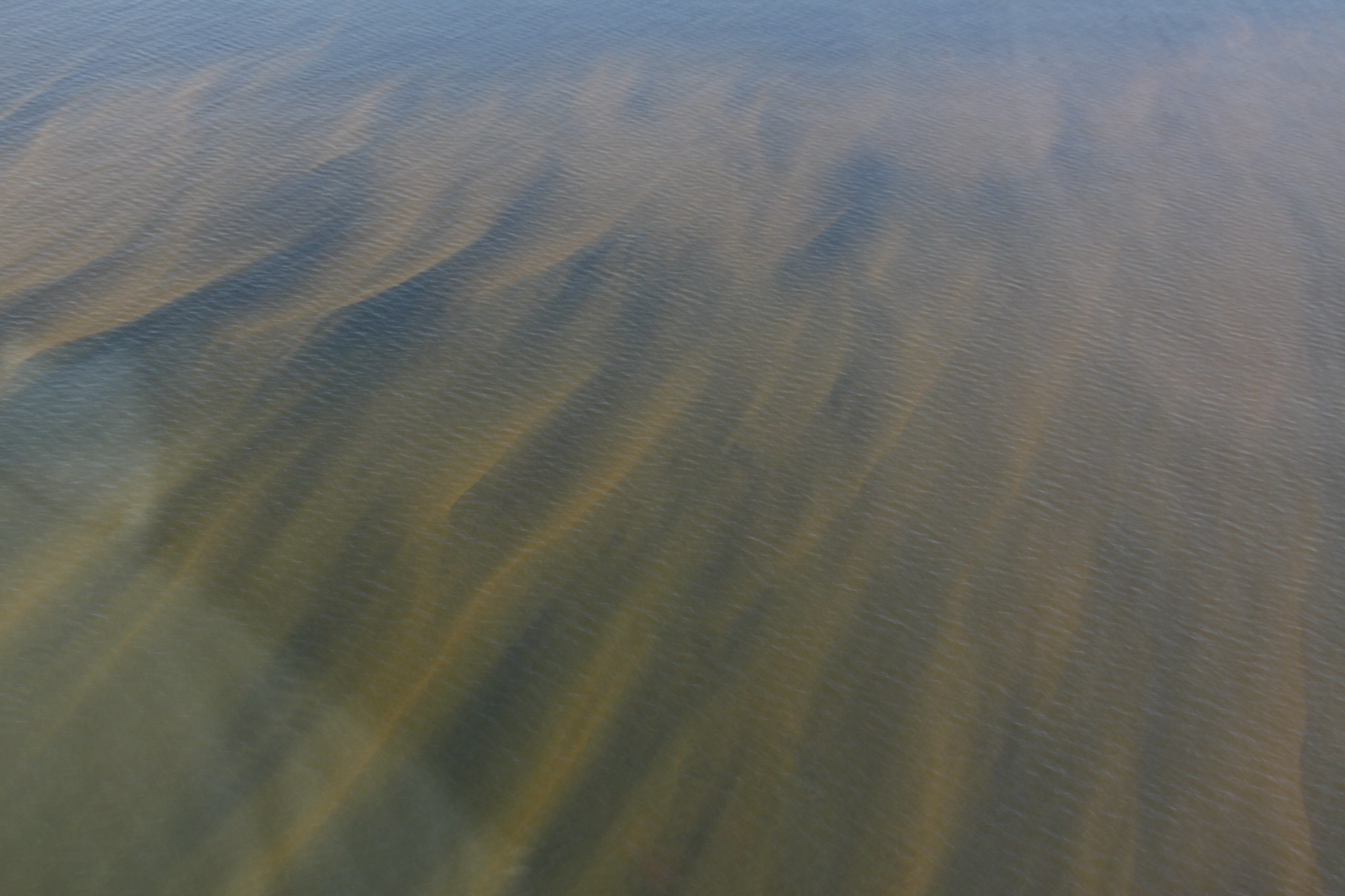 FWC conducted and aerial survey for red tide in 2018. This photo was taken between the 5 and 10-mile survey lines. Although the bloom was patchy, defined golden-green streaks indicative of red tide were observed. Observations from the 10- mile survey estimated that the bloom extended at least 15 miles offshore in some areas. In particular, this was noted off of Manatee and Sarasota counties. 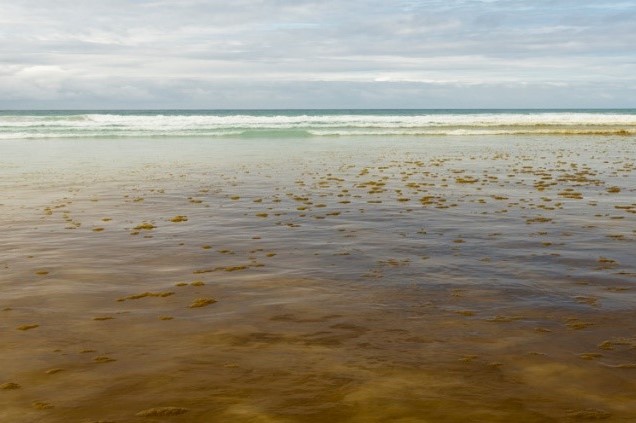 Image of red tide bloom taken from the shoreline. Photo courtesy of Florida Department of Health.